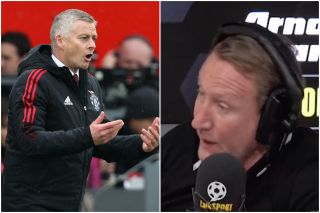 The Premier League is back which means all eyes will be on Manchester United and Ole Gunnar Solskjaer.

Unfortunately, the start of the season has not gone as planned for United and there is non-stop talk about a managerial switch at Old Trafford.

Parlour told Alan Brazil that he’d have no problem with the speculation if Solskjaer was relieved of his duties at Old Trafford, but not whilst he is still in the job. This came after Brendan Rodgers denied that talks were ongoing over the United job.

He told talkSPORT: “How could you turn Man United down? Of course Solskjaer is on thin ice! It’s not been good enough.”

🔴 “How could you turn Man United down? Of course Solskjaer is on thin ice! It’s not been good enough.”

The mainstream media don’t care about showing disrespect to anybody because they do it on a daily basis, so none of this comes as a surprise when United are doing so poorly in the league.

Sadly, this mounting pressure comes with managing the biggest club in the world.

There is no denying that Solskjaer has reached a point that his sacking wouldn’t come as a surprise to anyone. Even those, like myself, who backed him from the beginning.

It would be naïve to think United aren’t working behind the scenes because his job could become untenable if things get worse over the next three weeks.

The Norwegian is very much on thin ice.