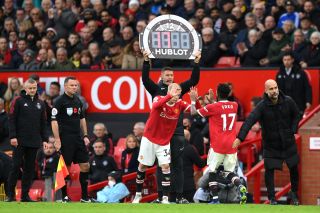 Van de Beek has been shunned by Ole Gunnar Solskjaer for the majority of his stay at Old Trafford, with the manager said to have blocked a move to Everton earlier this year.

His fortunes could, however, be about to take a turn for the better as the midfielder has reportedly impressed Manchester United coaches in training this week as Solskjaer looks to end his side’s disastrous domestic run.

That’s according to The Mirror, who add that Van de Beek could be handed his first start of the season this weekend as United make the trip to London to face Claudio Ranieri’s Watford.

The coaching staff is said to be considering Van de Beek’s inclusion from the start. Paul Pogba is unavailable, Scott McTominay is recovering from a throat virus, and Fred only recently returned from international duty with Brazil.

SN’s verdict on Van de Beek potentially starting against Watford and his future…
The 2-0 defeat against Manchester City roughly two weeks ago was scarce of positives for Manchester United supporters but they let their feelings on Van de Beek be known when the Dutchman was introduced in the second half.

Van de Beek was cheered on by the home crowd, who have been deprived of his presence since his 2020 move to the club. Should the 24-year-old start against Watford, he will be desperate to impress as he looks to kickstart his career again.

In truth, a poor performance could more or less seal his fate at Manchester United. He is already on the periphery and he cannot afford to fall further down the pecking order, if that’s even possible.

Solskjaer’s lack of options in midfield could finally work to Van de Beek’s advantage. In the long term, Van de Beek will have no interest in staying around if his situation doesn’t improve.

The 2022 World Cup is just around the corner and after being left out of all of Louis van Gaal’s international camps so far, he will be desperate to get back into it long before next year’s tournament.