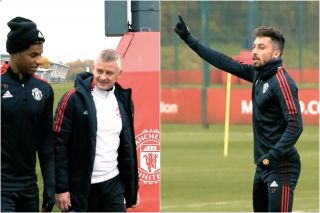 Manchester United are gearing up for a return to the Premier League and will be looking to end their horrific run of inconsistent results, having won just one game out of their last six in the league.

Ole Gunnar Solskjaer is under huge pressure to keep his job at Manchester United following a poor run of results, with his side claiming just one win from their last six in the Premier League.

The 2-0 defeat to Manchester City roughly two weeks ago was particularly damning but the Norwegian has survived to see another day as he prepares his team for this weekend’s clash at Watford, as seen below.

Fully focused on the task at hand 🧠💪#MUFC pic.twitter.com/1dn9MAgWcd

The footage was released on the club’s official media channels and as expected, only non-internationals were taking part in this week’s training session.

Players who were selected for international duty are expected to join training later this week, with several of Solskjaer’s first-choice players yet to return to the club.

SN’s verdict on Solskjaer’s future…
Unfortunately, it does look like the Norwegian’s tenure at the club is coming to an end. Quite simply put, the way things are going right now is unsustainable if United have any ambition to challenge for the top honours.

Ahead of the season, there were high expectations on Solskjaer and his side but so far, they have failed to be met and United run the risk of being left behind in the title race.

United’s list of fixtures between now and the end of January is awfully favourable for a long win-streak but United’s form does not suggest that’ll happen.