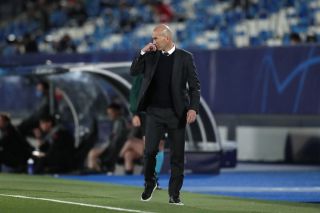 Ole Gunnar Solskjaer is under huge pressure to keep his job at Manchester United and subsequently, there have been endless links with potential successors.

Despite rumours over Solskjaer’s future at United, he has remained in the job and is expected to be in charge on Saturday when his side face Watford in the resumption of the Premier League.

Zinedine Zidane has been out of a job since walking away from Real Madrid earlier this year and the legendary Frenchman is one of the names linked with a move to Manchester United.

Now, there are claims that Manchester United are making progress in their bid to replace Solskjaer with the former France star. That’s according to the Daily Record, who add that Zidane is attracted by the possibility of working with Cristiano Ronaldo and Raphael Varane again.

Manchester United are said to be hopeful that Zidane’s relationship with the pair could help sway him towards a move to Old Trafford.

Zidane’s wife, Veronique, is however not sold on the idea of living in Manchester and would ideally like to see his husband take a longer break from football before returning.

Clearly, there are obstacles to surmount if Manchester United want to get this deal over the line but as things stand, Solskjaer remains the man in charge.

SN’s verdict on Zidane potentially replacing Solskjaer…
As of the time of writing, Solskjaer has undeniably done a great job in resurrecting Manchester United from the ruins Jose Mourinho left the club in.

The progress has been there for everyone to see but as the club is expected to challenge for the biggest honours, matters are starting to unravel and questions are being asked of the Norwegian.

Zidane boasts a dazzling resume as Real Madrid’s manager but it is merely that, a fairytale three-year spell with the greatest squad the Los Blancos has ever seen.

The next manager needs to be the best in the world and currently, there aren’t many to choose from. That’s why sticking with Solskjaer until a viable replacement is ready could be the way to go.