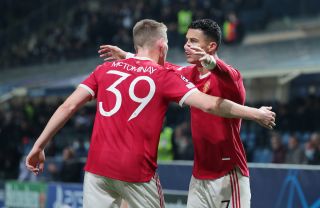 Manchester United midfielder Scott McTominay sat out the November international break but says he has “recovered well” from the illness which ruled him out.

McTominay, 25, shared an update for fans on Monday, prior to Scotland’s 2-0 win over Denmark, and it is good news for manager Ole Gunnar Solskjaer with the Reds back in action this weekend. He said via Instagram:

“Tough one to take not being available to help the boys this past week through not being well but I’ve recovered well and just want to wish the squad the best of luck for tonight.”

He had been called up to the Scotland squad but was forced to pull out.

However, United travel to Watford on Saturday in the Premier League and will be without several key players due to injury, including Raphael Varane and Paul Pogba.

A further absence of McTominay would significantly limit Solskjaer’s team selection, but thankfully that doesn’t appear to be the case.

The pressure is mounting on the manager to get results and it will only give us a boost to have McTominay back available.

Scotland also booked their place in the World Cup next year, which will be controversially held in Qatar, so at least McTominay has a major tournament to look forward to and he’ll be buzzing about that.