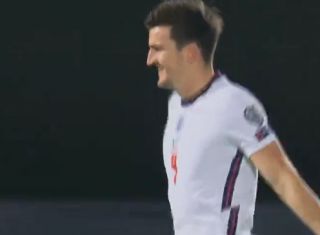 Harry Maguire scores his second goal in as many games for England.

The Manchester United skipper found the net from another set piece — something we are incapable of scoring from, yet he’s done it again for the Three Lions tonight in their World Cup qualifier against San Marino.

Moreover, Albania were unable to deal with Maguire last week after he opened the scoring in a 5-0 thrashing.

Gareth Southgate’s side only need a point from tonight’s game to secure their place in Qatar but they are already on course for three points as expected.

Maguire does well to power over his opponent to claim Phil Foden’s corner kick and find the back of the net.

Maguire with the bullet header! 💥

According to Opta, six of Maguire’s seven goals for England have been headed.

6/7 – Six of Harry Maguire's seven goals for England have been headed, netting five international goals in 2021 – at 1-0, only Harry Kane (12) has scored more this calendar year for the Three Lions. Presence.

His goal celebration this time around won’t attract as many headlines, which is something to be relived about as a reporter.