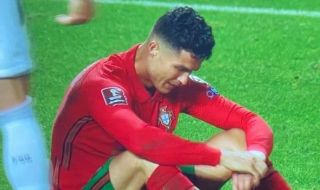 It was a disappointing international break for Portugal who dropped from first to second in their World Cup qualification group.

After drawing against the Portugal of Ireland and losing against Serbia, the Euro 2016 winners dropped into the play-offs for next year’s World Cup in Qatar.

A World Cup without Cristiano Ronaldo would come as a major shock and it is time for Fernando Santos to regroup his players and go back to the drawing board.

Moreover, it’s just a realisation now that if Portugal are to reach the World Cup in 2022, they will have to go about it the hard way, after losing 2-1 against Serbia last night.

Ronaldo fought back tears after the full-time whistle following a dramatic late winner from Alexsandar Mitrovic which was enough to secure Serbia’s place in Qatar.

Aleksandar Mitrović scored an injury-time winner as Serbia leapfrogged Portugal to seal their place at the 2022 World Cup! 🇷🇸🔥 pic.twitter.com/EOod5NCYAR

Portugal midfielder Joao Palhinha gave some insight to how the dressing room was feeling (via The Sun): “We have to take responsibility because we had a poor game.

“We just defended in the second half. Credit to Serbia, they played very well but we had the capacity to be on top.

“Everyone in the dressing room is disappointed but we have to look ahead to the play-offs now because we are more than good enough to be in the World Cup.

“You can’t win all the time. Difficulties are part of life and this feeling should give us more strength.”

Portugal had the perfect start against Serbia, too, with Renato Sanches breaking the deadlock just two minutes in. Serbia equalised after the half-hour mark through Dusan Tadic.

The winner was Mitrovic’s 44th goal on the international stage.