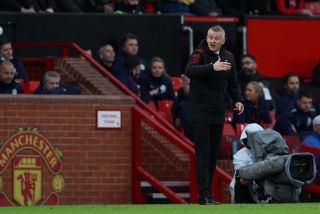 The abuse being directed at Manchester United manager Ole Gunnar Solskjaer doesn’t sit well with Andy Cole, who has been speaking to Sky Sports.

Everybody in this day and age knows how toxic social media can be.

After becoming a dad just over a year ago, I know I will be trying to keep him away from its toxicity for as long I can.

Unfortunately, it feels all too common within the online Manchester United community in recent times, especially with the stuff you see about Ole Gunnar Solskjaer on a regular basis as well as first team members being subject to vile racist abuse (see example of a report from BBC Sport).

It’s important to remember that Solskjaer’s shortcomings are as a manager, not as a person. He has also done a good job to bring us this far to build a squad other managers can only dream of, but is there a coach out there ready to take United to the promised land? That is the next step and there’s little point replacing the current manager with someone unlikely to do that.

Speaking to Sky Sports News, former Manchester United striker Andy Cole revealed that seeing his ex-teammate being abused from one section of either the media or supporters “doesn’t sit well” with him.

Andy Cole says no manager deserves the stick Ole Gunnar Solskjaer has been getting. pic.twitter.com/Za0lwtdAVy

We wholeheartedly agree with Cole.

It’s also a regular occurrence on Sky Sports that pundits will try to get Gary Neville to say Solskjaer should be sacked on air. A clear attempt to drive an agenda through the media and I don’t recall other pundits calling for a manager’s head.

Solskjaer is a legend.