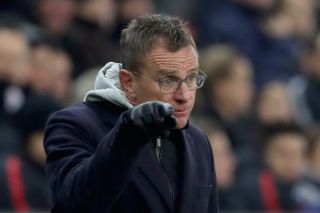 With just seven wins in 16 for Manchester United this season, rumours have continued to circulate regarding the future of Ole Gunnar Solskjaer.

According to reports, Brendan Rodgers, Mauricio Pochettino or Erik ten Hag are likely candidates to take over.

However, one name that has popped up in recent days is Ralf Rangnick. The German has enjoyed spells at RB Leipzig, Schalke, Hoffenheim, Hannover and Stuttgart as manager.

But it isn’t just on the touchline where the 63-year-old has made his name. Rangnick currently operates as Managing Director of Sport and Communications at Russian side Lokomotiv Moscow, where he was appointed in July 2021.

Before taking over his current role at Lokomotiv Moscow, Ralf Rangnick was set to sign a three-year contract as head coach of AC Milan. Only until he spoke to German media organisation, Mitteldeutsche Zeitung.

In an interview, the former defensive midfielder claimed (quotes via MilanNews.it): “There has been interest from AC Milan but with the Coronavirus situation there are other things to considers, besides thinking if Ralf Rangnick is the right man for them or vice versa. If theoretically I have to think about going somewhere else, I should be able to do things my way.”

At Leipzig, he is credited for bringing young talents including Timo Werner, Naby Keita, Yussuf Poulsen and Emil Forsberg to the club. But the list doesn’t end there. Just across the border in Austria, Rangnick was the man who invested in Takumi Minamino, Dayot Upamecano, and now one of European footballs stars, Erling Haaland.

With a very attracting brand of football, Rangnick is famously known to have a custom-made clock as manager of Leipzig. A training tool Rangnick had made to instil a style of play into his side, with the ticking of the clock audible on the training pitch.

“The ticking can be irritating for them at first, but we’ve noticed that this kind of training can affect players in just a few weeks”, Rangnick said.

The clock was placed to make players aware that they had eight seconds to win the ball back, and 10 seconds to have a shot on goal. The German continued, “They adjust their style of play, and it becomes instinct. They look to play forward more quickly.”

Well, this certainly worked for the man nicknamed ‘The Professor’. After taking over his second spell as Leipzig boss in 2018/19, The Red Bulls finished 3rd, behind Bayern Munich and Borussia Dortmund on 66 points. The season before under Ralph Hassenhüttl, Leipzig managed just 53 points, finishing in 6th place.

Last season, Leipzig were knocked out of the Champions League by Liverpool in the round of 16. In 2019/20, they enjoyed a fruitful spell in the competition before falling short in the semi-finals to PSG. The German outfit knocked out Spurs and Diego Simeone’s Atletico Madrid. All with Ralf Rangnick overlooking the footballing side of things.

In his time at Schalke, the 63-year-old guided the Gelsenkirchen side to runners-up finish in the Bundesliga in 2004/05. Leading the club back into the Champions League spots for the first time in four years.

It’s quite clear, that Ralf Rangnick is a pure football man. A man obsessed with styles of play and tactics. However, it begs the question whether Rangnick could be the man to guide Manchester United back to reclaiming the Premier League title.

One response to “An insight into Ralf Rangnick”