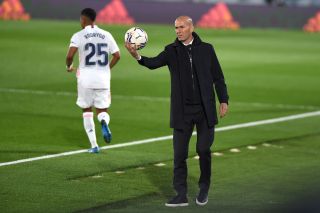 Manchester United are getting ready to make their move on the managerial front, according to reports. Ole Gunnar Solskjaer is under increasing pressure to keep his job at the club amid a poor run of results.

The Norwegian manager has overseen just one win in United’s last six Premier League games, with his side accumulating just 17 points after 11 games this season.

United’s inconsistent start to this season has resulted in speculation over Solskjaer’s future, and according to new reports, the Old Trafford hierarchy have their eyes locked on one man in particular.

According to The Times, Manchester United are attempting to persuade Zinedine Zidane to become their next manager, with the club said to be stepping up their bid to recruit him.

Zidane, who won three Champions League titles on the bounce between 2016 and 2018, is, however, said to be unsure whether taking over at Old Trafford is the right move for him.

Mindful of that, Manchester United are reportedly hopeful the club’s acquisitions of Cristiano Ronaldo and Raphael Varane would aid their bid – two players Zidane worked closely with at Real Madrid.

SN’s verdict on Zidane potentially taking over after Solskjaer…
We are yet to receive any clarity on Solskjaer’s position at the club and the public backing has been scarce. Following the 4-2 defeat to Leicester earlier this season, media were swiftly briefed of United’s backing of Solskjaer but that hasn’t happened in the last couple of weeks.

Zidane is undeniably a talented coach – three Champions League titles don’t happen on accident. But some supporters have reservations over the Frenchman and whether he is the right fit for the club.

Leicester manager Brendan Rodgers has also been linked with the job, with some claims even suggesting the former Liverpool boss is house-hunting in the Manchester area.