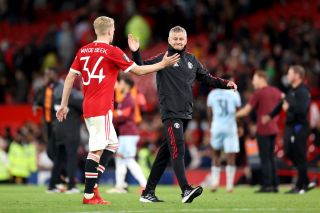 That difficult start didn’t end there for the Dutchman, as he was later forced to pull out of the Netherlands squad to last summer’s European Championships due to injury.

Appearances have been scarce this season, too, with his only start in all competitions coming against West Ham in the Carabao Cup.

Van de Beek was close to putting an end to his Manchester United misery towards the end of the last transfer window but had his wishes to leave blocked by Ole Gunnar Solskjaer, who blocked a loan move to Everton.

Journalist and transfer specialist Fabrizio Romano has now given an update on the situation, explaining how Van de Beek’s future is ‘clear’.

Donny van de Beek situation is so clear. He loves the club and he’s still super professional in training, doing his best for Man Utd – but if the situation remains the same, he will leave Manchester United in January. 🔴🇳🇱 #MUFC

Despite struggling since his move almost 18 months ago, Van de Beek loves the club, Romano wrote on Twitter. Furthermore, he’s said to be ‘super professional’ in training.

Romano has, however, warned that Van de Beek will leave the club in the January transfer window if his situation doesn’t change in the six weeks between now and the market opening.

SN’s verdict on Van de Beek’s potential exit…
The latest update from Romano won’t come as a surprise to anyone. In truth, most supporters were expecting the 24-year-old to leave in the summer but as mentioned above, the coaching staff didn’t agree.

Solskjaer was evidently adamant about keeping him around but given Van de Beek’s nonexistent presence on the pitch, why did he fight so hard to keep him?

Van de Beek’s stock has fallen dramatically since he joined United and the Old Trafford hierarchy will be desperate to recoup as much of the fee they paid for him as possible, which could mean that a loan move is on the agenda.

A permanent exit would cut his ties with the club and solidify his place as one of the most disappointing transfers in modern history at the club – an unfortunate development in his exciting career.