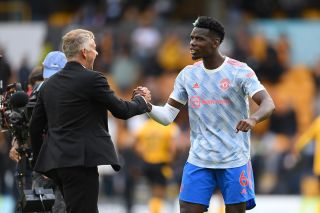 Ole Gunnar Solskjaer is under increasing pressure to turn things around at Manchester United amid a poor run of form. The Reds have won just one of their last six Premier League games, with big defeats to Liverpool and Manchester City particularly damning on his side.

Following last season’s second-place finish and a run to the Europa League final, spirits were high this summer when Jadon Sancho, Raphael Varane, and Cristiano Ronaldo arrived in high-profile transfers.

After a good start to the season, which included four wins and one draw from their opening five Premier League games, the campaign has unravelled and United now sit with only 17 points after 11 games.

It’s not quite the full crisis United endured under Jose Mourinho but questions are being asked over Solskjaer’s squad and who he should keep around if he’s trusted to turn this dire situation around – Stretty News takes a look.

Paul Pogba
In truth, the Frenchman is a nuisance and his neverending media presence has been tough for the club to deal with in recent years. Furthermore, his talkative agent has rarely had anything positive to say about Pogba’s employers.

Off the pitch, the issues are glaringly obvious and unfortunately, they’re also there for everyone to see on it. Pogba is out of place in this Manchester United side and there simply isn’t enough space for him.

Solskjaer prefers to play a two-man midfield and Pogba has proven to be a liability in that system. On the wing, where he is far better, his inclusion comes with leaving out Sancho or Marcus Rashford.

Pogba has less than one year remaining on his contract at the club and considering the astronomical wages he will be demanding to extend, it would make sense for United to cut their losses and accept his departure for nothing. Above all else, it would solve a selection headache for the manager.

Donny van de Beek
As opposed to Pogba’s failings on the pitch, Van de Beek has never really had the chance to show what he’s about. His situation at Manchester United is puzzling and there isn’t a reasonable explanation as to why he’s not playing.

Nevertheless, he isn’t and he should be allowed to leave in January to express his talents elsewhere. His constant no-shows at club level have resulted in the 24-year-old losing his place in the Netherlands squad and he is growing increasingly frustrated with life at Old Trafford.

Van de Beek’s potential exit wouldn’t affect United on the pitch but it would help the Ajax academy graduate a long way towards restoring the promising career he had built at the Amsterdam club.

Dean Henderson
Few people would have seen this season’s developments coming on the goalkeeper front. Last season, Dean Henderson overtook David de Gea as Solskjaer’s first-choice goalkeeper but the roles have been reversed this year.

De Gea is in sparkling form and has been United’s best player this season, a throwback to his consistent match-winning performances prior to his dip in form.

Earlier this week, there were reports that Dean Henderson will look to leave Manchester United next summer if he is unable to regain the number one spot between the sticks.

At the time of writing, Henderson reclaiming that spot is looking unlikely and an exit might prove to be the best thing for his career. Furthermore, a promising English goalkeeper, who has been capped by England, would add nicely to the club’s transfer kitty.