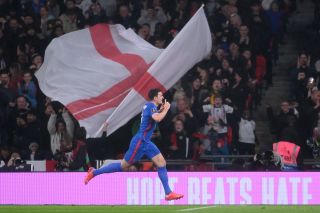 The international break has done anything but bring some kind of peace to the constant bickering that has plagued Manchester United this season. A heavily criticised goal celebration has had Harry Maguire answer more questions, especially from Roy Keane who was covering the match for ITV Football.

Keane’s take came at half-time as England dominated Albania in their World Cup qualifier at Wembley. They won the match 5-0 thanks to a hat-trick from Harry Kane, Maguire’s header and another goal from Liverpool midfielder Jordan Henderson.

However, after cupping his ears in celebration, Keane was fuming at the England defender. This led to some strong opinions about Maguire, with former Arsenal star Ian Wright in total agreement with the Irishman.

It was not the first time Keane has hit out at Maguire and probably won’t be the last time either.

Maguire claims his celebration “wasn’t directed at anyone” after he slid on his knees and placed his hands behind his ears.

He told ITV after the match: “No it wasn’t directed at anyone,” Maguire told ITV, as quoted by the Metro. “It was a knee slide, obviously I put my hands on my ears, but of course it’s not.

“I’m Manchester United captain, of course I’m going to get criticism when the team isn’t doing well. I fully expect that, but of course it’s not directed at anyone.”

I don’t think Keane took offence to the celebration because he felt Maguire was hitting out at pundits like himself. They’re the last thing the centre-back needs to worry about because his performances for United this season are not good enough.

Back to the drawing board to find a new celebration…