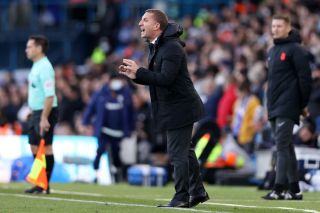 That’s according to The Sun, who claim the Leicester City manager has ‘moved a step closer’ to the Manchester United job, despite Ole Gunnar Solskjaer still being in charge.

Alan Nixon and Phil Thomas’ report suggests Rodgers is United’s first choice to replace the Norwegian, amid speculation that the former Liverpool boss will take over at Old Trafford before Christmas.

On top of that comes a line of information suggesting United have decided they will not spend more money on the squad in January. This news doesn’t surprise us after Solskjaer added four players to his squad in the summer, in Tom Heaton, Jadon Sancho, Raphael Varane and Cristiano Ronaldo.

The only fault I have with this piece is the how it’s written – like Solskjaer doesn’t exist.

Is the board guilty of going behind another manager’s back like they did with Louis van Gaal by sounding out Jose Mourinho while the Dutchman was still in charge?

Moreover, a recent report from Caught Offside suggested that Rodgers and United had already come to a verbal agreement over the job.

Is Brendan Rodgers the man to take United to the next step? Let us know in the comments section.

Those behind the article in The Sun will trust their sources and it’s likely to hit all the newspapers on Sunday. We’ll be keeping a close eye on developments over the coming days, weeks or months.