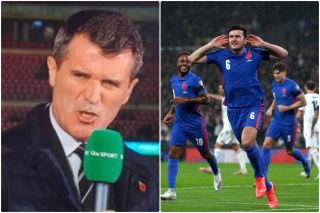 Roy Keane has been critical of Harry Maguire in the past (haven’t we all?) and the former Manchester United captain pulled no punches tonight after the centre-back’s goal celebration against Albania.

Maguire’s disappointing run of form has raised eyebrows this season and it has not helped that United have started the season so poorly, but he scored tonight and cupped both of his ears in celebration.

It was clearly a hit back at the criticism he has received this season – but a goal against Albania is hardly redemption.

As captain of Manchester United he will need to win the Premier League or Champions League. After all, that is what he signed up for when he left Leicester City two years ago.

Keane felt the celebration was “embarrassing” and former England international Ian Wright was in agreement.

“When a player scores puts his hands to his ears he’s like shutting the critics up, but I think that’s embarrassing, he’s been a disgrace to Man United. He thinks he scores there he’s shut his critics up, embarrassing,” Keane said at half-time, during ITV‘s coverage of the World Cup qualifier between England and Albania.

Wright added: “I don’t think he needs to do it.”

Why doesn’t Maguire just let his performances do the talking? Let us know your thoughts in the comments section.

After tonight’s bullet header, we should be expecting more goals from Maguire but his record for the club doesn’t compare to his goalscoring form for England. He has four goals in 2021, only bettered by Harry Kane and Raheem Sterling when it comes to representing the Three Lions.

Of course, England played a weak side tonight and Maguire wasn’t asked to do much defending.

It’s his defending that lets him down most.

Maguire must learn to face his criticism and to use it in a way to better himself as a player. That is what the best players have done, and maybe the price tag is weighing down on his shoulders.

Perhaps he feels at ease in this England side that usually plays against countries they can beat without much effort. Take tonight as an example.

Hopefully Maguire can come back after the internationals and show why United paid so much money for him in the first place. That is what we all want with less of the ear cupping for now.