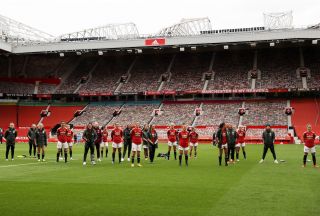 Manchester United Women are set to return to the Old Trafford pitch later this season, having played on the hallowed turf at the Theatre of Dreams for the first time last season.

It has now been confirmed that Marc Skinner’s side will play at Old Trafford for the first time this season in a historic fixture against Everton – the first time fans will be in attendance to watch the women’s team at Manchester United’s home.

As per the official Manchester United website, the mouthwatering clash with Everton is scheduled for March 27 next year as United’s women’s side reaches another milestone in their rapid rise.

“It’s a really exciting opportunity and another fantastic milestone for this team to play at Old Trafford in front of thousands of fans,” newly appointed manager Skinner told club media.

“We are so thankful for the continuous support they have given us, and I hope that they turn out in big numbers and get behind the team as much as possible for what will be a really special moment for everyone involved.”

SN’s verdict on the news…
Casey Stoney, who left United over the summer, was unlucky not to oversee her side in front of a packed Old Trafford when they faced West Ham last season.

Restrictions due to the COVID-19 pandemic meant that sporting events were held behind closed doors and Manchester United Women’s first Old Trafford fixture could only be witnessed from the comfort of your own home.

Skinner will be delighted with the news and hopefully, it will become a far more regular occurrence rather than a one-time occasion each season. The appetite for women’s football is growing with each passing week and Manchester United will be desperate to stay on top of things.

A large section of the club’s supporters will understandably be more inclined to prioritise the men’s senior side but under Skinner, huge strides are being made to become the leader outfit on the women’s front.