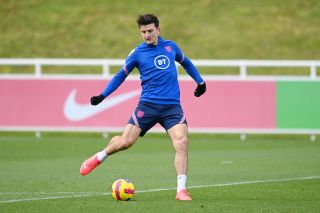 Maguire is the only United player available to Gareth Southgate tonight after Marcus Rashford pulled out of the initial 25-man squad, while Luke Shaw sustained a head injury in the Manchester derby and has not been given the go ahead to play just yet. The left-back could make England’s next qualifier against San Marino next week, though.

Gareth Southgate has gone with a back three of Kyle Walker, John Stones and Maguire – with Jordan Pickford in goal. Jordan Henderson steps in with Declan Rice having withdrawn from the squad. The Liverpool midfielder will partner Kalvin Phillips in the middle.

Although he hasn’t been scoring many goals for Tottenham this season, Harry Kane will lead the line flanked by Manchester City duo Raheem Sterling and Phil Foden.

Manchester United duo Jadon Sancho and Jesse Lingard were both snubbed from the squad selection and neither can complain too much as they haven’t played enough this season. That decision could see Arsenal’s Emile Smith Rowe make his debut tonight or against San Marino.

Maguire’s form this season has been abysmal so he will be looking to turn a corner with a strong performance tonight. He will certainly hope this goes better than his run-in with an Albanian in Greece last summer!

The Three Lions need four points from their last two games to secure their place at the World Cup in Qatar next year.