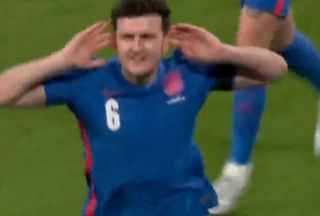 Harry Maguire kept his head when England needed it most.

The Manchester United skipper has had to deal with a ton of criticism this season after a run of shocking performances for the Reds, but you could tell how much that goal meant to him tonight.

He continues to have his struggles in a United shirt yet somehow turns it on when playing for England. At Euro 2020, he was unplayable at the back for England and he started tonight’s game well with a goal to his name.

The ball came from a delicious free-kick by Reece James and the ball found Maguire’s head before crossing the line. Footage below courtesy of ITV Football.

How's that for the critics?! 🤫@HarryMaguire93 plants his header home following a delicious cross from @reecejames_24 🎯

Why doesn’t Harry Maguire score headers like that for United? Let us know in the comments section.

According to OptaJoe, only Harry Kane and Raheem Sterling have scored more goals for England in 2021 than Maguire.

England knew going into tonight’s game against Albania that they needed four points from their remaining two matches. They are on course for three tonight thanks to Maguire.

Update: Harry Kane made it 2-0 just I clicked published.