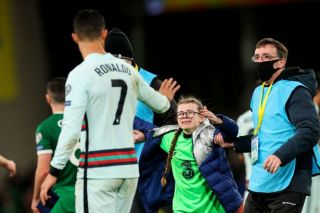 The 11-year-old girl who ran onto the pitch to get Cristiano Ronaldo’s Portugal shirt after the scoreless draw between the Republic of Ireland and Portugal will not be fined, the FAI has confirmed.

Addison Whelan managed to get a hug from her hero as well as his match shirt!

After the match, however, she was told by a security member that she would have to pay a hefty fine (€3,000) for running out onto the pitch, but a statement from the Football Association of Ireland confirmed she would not face any fine for approaching the Manchester United star, as per The42.

Cristiano Ronaldo gives his shirt to a young emotional fan who invades the pitch at full-time 👏 💚 pic.twitter.com/mvLorZttPP

Speaking to FM104 on Friday, the young girl said (via Daily Mail): “I was fined for running onto the pitch. My dad’s going to pay it.”

Thankfully, the FAI came to their senses.

Speaking to the Irish Times, Whelan added: “We were sitting in the second row and when the match ended I just ran straight for Ronaldo. All the stewards came after me but none of them caught me, I was too fast. That’s my coach Alan with all his sprints he has me do.”

Ronaldo saw no issue with the young fan running onto the pitch. He took a moment to make sure the stewards didn’t just drag her away with nothing to show for it.