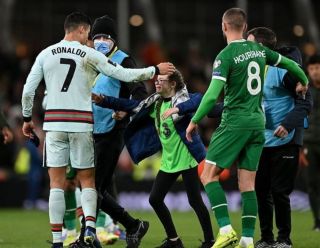 Cristiano Ronaldo made a young fan’s night at the Aviva Stadium in Dublin after she ran onto the pitch just after the full-time whistle in a scoreless World Cup qualifier between Ireland and Portugal.

Under fire Ireland manager Stephen Kenny could hold his head high after an encouraging performance from his players, who were up against it, with Ronaldo starting as well as Bruno Fernandes and Diogo Dalot.

Portugal were reduced to 10-men just minutes from the end when Pepe was dismissed for a second yellow card after putting his hand into the face of an opponent.

Not only did the young girl get a hug from her hero, she came away with his match shirt knowing all of the Irish players would’ve been chasing it down moments later – had any not asked Ronaldo during the match.

It was the first full-capacity crowd at the Aviva since the COVID-19 pandemic hit. Ronaldo was booed by sections of the home support throughout the match, and we’ve no doubt those were Liverpool fans too distracted to get behind their own players on a night they played well.

Read more about the Reds on international duty from the Stretty Newsletter.

Shelbourne Football Club have identified the young girl as Addison Whelan, one of their own players who plays for the U-13s.

A moment to remember.

Kenny thought Ireland were unlucky not to beat Portugal on the night.

“We’ve played Portugal twice, we’ve played them in Portugal and in the 88th minute we were 1-0 up,” Kenny told RTÉ at full-time. “Today we’ve drawn at home – and we’re disappointed with that. The players are very disappointed. That shows you the sort of strides we’ve made in recent months.

“I think the draw was important. We go to Luxembourg on Sunday and that draw means we can finish ahead of Luxembourg with a win, which we want to do.

“We started nervously, they were good early on in terms of possession. Last 20 minutes of the first half I thought we really caused them problems with a lot of corner kicks. Chiedozie was causing a lot of problems with his pace.

“I thought we were the better team overall in the second-half. I thought we controlled a lot of it – with 11. I thought we played very well in that period. They’re always a threat – so much quality, as we’ve seen with the chance they’ve had.”

Portugal moved top of the qualifying group on goal difference and now only need a point against Serbia on Sunday to qualify for the World Cup.