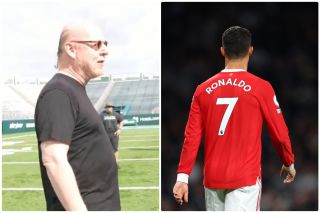 The Glazers try claim they love Manchester United – the football club – when all they really care about is the money it makes their family every year.

We have long documented the Glazer’s shortcomings in opening a dialogue with supporters, their sheer greed, and how their corrupt takeover in 2005 shouldn’t have been allowed to happen.

The fans have been ignored but we are not going to let this one slip as Avram Glazer showed how little he knows about United’s incredible history when he gave a *motivational* speech to the Tulane University football team in America.

“Cristiano Ronaldo joined us when he was 16 years old – from the day he joined Manchester United, he was the first person at practice and the last person to leave practice,” Avram said.

“Great athletes are not just born great, but they have to work extra hard and they try their best, you have to be as focused as possible and try to achieve what you can achieve.”

Stretty News ran a quick fact check on the above statement to find Ronaldo actually joined United when he was 18-years-old. He was still playing in Sporting Lisbon’s academy at 16.

If you could ask Avram Glazer one question, what would it be? Let us know in the comments section.

How about tell us what the Glazers did with the Ronaldo money in 2009 when a then-record-breaking transfer saw him leave United for Real Madrid?

The Glazers never answered that question nor a thousand others.