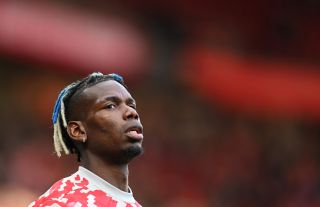 Manchester United midfielder Paul Pogba still needs to decide on his future with his current contact set to expire at the end of the season. New reports suggest the France international, who is out injured for the foreseeable future, wants to become the highest-paid player in English football.

The club has been trying to get Pogba to sign a new deal for some time, but it is understood that the player has been weighing up his options and has yet to decide on what he wants to do come the summer.

This is the biggest hint yet that he sees a future at United, though I’m not sure he warrants the salary he is reportedly demanding, as per L’Equipe (via Sport Witness). The newspaper claims Pogba wants to ‘break all salary records in the history of the Premier League.’

Of course he does, skipping hand-in-hand with his agent Mino Raiola.

It’s a bold move from Pogba to ask to become the league’s highest paid player when his performances are usually underwhelming to say the least.

I’m probably not alone when it comes to going cold on Pogba. Enough is enough.