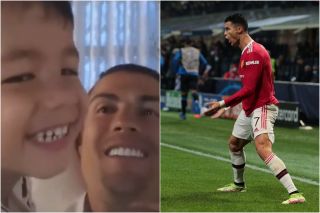 Unless you’ve been living under a rock for the past three months, you’ll know that Cristiano Ronaldo sealed a sensational return to Manchester United over the summer and has wasted no time in getting back amongst the clubs at the club.

Ronaldo opened his account for the season with a brace on his ‘second debut’ against Newcastle in September and has now found the net nine times in just 12 appearances.

His regular goalscoring form has resulted in several ‘SIU’ celebrations and his famous goal show has now spread to his kids.

Some wholesome Ronaldo content to cheer the sub up in these dark times. Teaching his son the ‘SUI’ from reddevils

In a new adorable video, Ronaldo is seen teaching his youngest son how to do the celebration, as seen above.