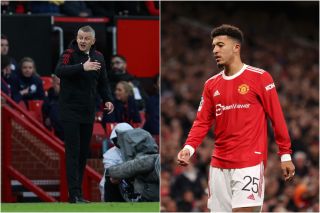 Manchester United have made a poor start to the season, their worst since Jose Mourinho’s final campaign at the club to be precise. Despite winning four out of their opening five games, they have accumulated just 17 points from 11 games so far.

The recent poor run, which has seen Ole Gunnar Solskjaer’s side pick up just one win from their last six Premier League games, has piled the pressure on the manager.

Solskjaer pined for the club to sign Jadon Sancho in recent years, with the Norwegian finally landing his priority signing over the summer. The 21-year-old has, however, failed to impress in his first couple of months at the club.

Recently, he has been the victim of a system change, with Solskjaer’s newly found 3-5-2 formation not featuring any wide players other than the attacking full-backs.

Now, a report from The Athletic claims Solskjaer has been coaching Sancho as a wing-back in the formation, with doubts over Aaron Wan-Bissaka’s offensive output remaining.

As per the report, Solskjaer could opt to use Sancho in the position against oppositions who are expected to sit back – a tactic the Norwegian’s side has struggled against in recent seasons.

SN’s verdict on Sancho’s potential new position…
Considering the magnitude of Sancho’s arrival earlier this year, it would seem a bold decision to play him in a defensive position. Manchester United are spoiled for choices in attacking areas and Solskjaer could be forgiven for trying to fit all of his talents into one side.

But Sancho is not a defender and certainly not a defender – the former Borussia Dortmund star must be wondering how his drop in form could be so dramatic after an incredible end to last season.