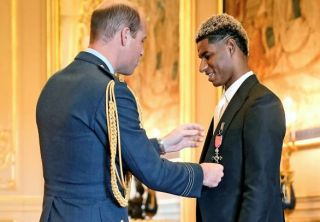 A range of photos have emerged of Manchester United star Marcus Rashford receiving his MBE from Prince William at a ceremony at Windsor Castle.

Rashford, 24, has been deservedly recognised for his work to ensure no child in need went hungry. His efforts resulted in the Government changing policy over its free school meals vouchers during the lockdown, forcing Prime Minister Boris Johnson into a U-turn.

However, despite having a lot on his plate already as a professional footballer, Rashford has maintained his campaign and has shown no signs of stopping until the work is done.

The England star was joined by his mother, Melanie, who he credited as a huge inspiration behind his incredible work off the pitch.

“She’s a huge inspiration,” Rashford said, as quoted by Sky Sports. “Everyone knows my story of growing up, but you have to remember I have two brothers and two sisters all older than me, and she’s a single parent throughout the while way of that.

“However bad it is for us, it’s 10 times worse for her, so any awards I’ve got for the charitable things I’ve done, they’re all at her house and this one will go there as well.”

On his conversation with Prince William, Rashford said: “We were speaking about football actually. Just speaking about the Euros and what it was like after, how good it was to see everyone come together and support the team.

“Other than the football we were speaking about the campaign, how pleased he is that I started it and what’s next.”