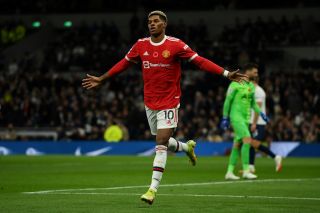 It has been tough watch this season to see us start with such high expectations but with only 11 matches played in the Premier League there is uncertainty over Ole Gunnar Solskjaer’s role as Manchester United manager.

Marcus Rashford returned from his shoulder operation after missing a chunk of the season to score 2 goals from 4 games (via Premier League) and he will be hoping to help put United’s league campaign back on track when the current international break ends.

The England forward pulled out of the 25-man England squad this week to focus on his recovery – after missing not only the start of the season but he came down with an illness when the players returned from their trip to Atalanta last week.

Rashford, who received his MBE from Prince William at Windsor Castle this evening, has acknowledged United are in a “difficult patch” but has insisted everyone at the club is working hard to turn things around.

“And for the players that we sign, they see Manchester United as the great club it is and they want to give everything they can for the badge.

“And those things remain the same whether you’re in good spells or bad spells.

“I know at the moment we’re in a difficult patch but the desire and ambition never changes.”

That is exactly what Solskjaer needs to hear at this moment in time because we’ve already had reports of revolt in the dressing room, as per the Daily Mail.

Crushing defeats to arch-rivals Liverpool and Manchester City have piled the pressure on the Norwegian.

No matter what your take is on Solskjaer’s position, the last thing we want as fans is to see the players throw in the towel.

The fans in the Stretford End won’t do that and the team shouldn’t either.

Rashford is clearly trying to build momentum behind the team and it’s all he can do right now.

Hopefully he has a good recovery and returns to his goalscoring ways after the break.