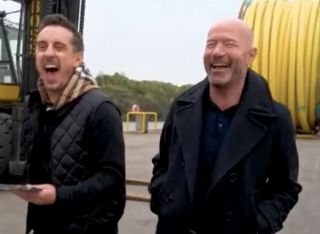 Alan Shearer joins Gary Neville in his latest Overlap interview — an ongoing series that has featured the likes of Tyson Fury and Jamie Carragher in recent weeks.

The biggest Overlap interview came in the summer on a golf course with Tottenham Hotspur striker Harry Kane, who dropped more than enough hints to suggest his time at the club was finished, although the transfer window dragged on and it was clear that Daniel Levy was keeping him under contract.

It’s all about quick fire questions from Neville to help give you a better insight into his guest. For someone I didn’t see being a TV pundit as a player, the former United captain deserves credit for upping his skills in the media work post retirement.

One of Neville’s questions sparked a funny response from Shearer, though.

He asked who was the ‘most difficult defender you had to play against?’

Before confirming that it was former Arsenal centre-back Tony Adams, Shearer said: “Not you!”

I wasn't that bad @alanshearer 😂
Went for a walk around Newcastle with Alan and had 30 quick-fire questions ready for him .
The full interview will be out next week, make sure to subscribe to The Overlap now 👍 https://t.co/Hj3IVnY0nb pic.twitter.com/tbU9Fbklt3

Neville could only laugh at Shearer’s answer but he didn’t look one bit surprised.