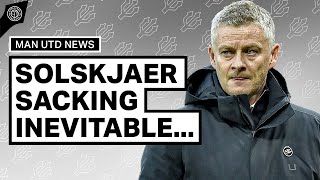 Jay from Stretford Paddock is in the studio to run through all the paper talk on Manchester United.

The title of the video gives away the topic – ‘Solskjaer sacking inevitable…’ – but you knew what the papers were going to be focusing on throughout this international break, anyway.

Jackson Jackson reports, as per The Guardian, that Ole Gunnar Solskjaer expects to be in charge for the next match in the Premier League against Watford. There are hints in this article to suggest the Norwegian job could be on the line before the players return from the internationals.

The Stretford Paddock take questions from their live comment feed and many asked about Ralf Rangnick, who is a name that has been linked with United in recent days, as a short-term and long-term fix (via Manchester Evening News).

Jay also reads out a line we sent in about Ajax manager Erik ten Hag.

Our understanding is that Ten Hag didn’t get a full vote of confidence for the Tottenham Hotspur job because of his poor standard of English. Could that be a problem for United if they eventually decide to sack Solskjaer?

Jay looks at the conflicting reports about Solskjaer – with some reporters claiming he could have days and weeks left in the position, while Gary Neville believes the Glazers will stick by the manager for the remainder of the season.

Diego Simeone is another name that popped up in the comments section.