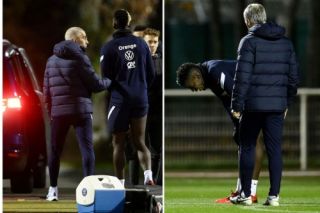 The international fixtures haven’t even kicked off yet and Manchester United have fresh injury concerns.

Paul Pogba was back training with the France team ahead of their upcoming World Cup qualifiers against Kazakhstan and Finland when he was pictured hobbling away from the pitch in visible pain.

RMC Sport issued a video of Pogba striking a ball towards goal from the edge of the box before the midfielder pulled up while holding his preferred right leg. France manager Didier Deschamps then checked on Pogba before he left in a car, but France have yet to comment on the severity of the knock.

It wouldn’t be the worst idea to let him sit out the upcoming two games, though I wouldn’t go as far to say United will be sweating over this given Pogba’s form of late.

Obviously, we will have to wait for the examinations of the medical staff before going deeper into this one. It might be nothing serious.

Pogba started the season well with an array of assists in the Premier League, but he is back to his inconsistent self, and his stupid tackle against Liverpool which saw him sent off may well be the final straw when it comes to his time at Old Trafford.

The Frenchman’s uncertain future has been well-documented, and he is free to negotiate with clubs across Europe from January.

While Pogba has been a disappointment at United, it will still be a blow to the club if they lose him on a Bosman in the summer. That will show that they were played by not only Pogba, but Mino Raiola, with the multi-million-pound footballer potentially leaving without a transfer fee in return.