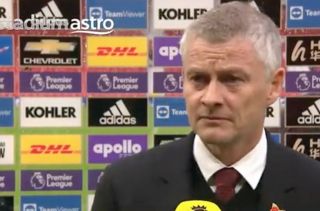 After a run of bad results and performances, it is rare that footballers will take all the blame. That’s why Ole Gunnar Solskjaer needs to be careful or he will end up losing the Manchester United dressing room.

United lost again yesterday, 2-0 to local rivals Man City. It was an embarrassing display which lacked fight and attacking quality as United got bullied off the pitch.

It wasn’t too dissimilar to the 5-0 thrashing we suffered a fortnight ago at the hands of Liverpool. We agreed some time ago that the less said about that the better, but Solskjaer rumbles on as manager after a questionable start to the 2021/22 campaign.

Solskjaer seemed taken aback when a reporter quizzed him on his players’ mentality after the derby.

The question came after skipper Harry Maguire, who has been in terrible form this season, said he felt the team had lacked the belief to get themselves back into the game after going behind in the opening minutes.

This led to an awkward interview for Solskjaer and he seemed surprised by his captain’s post-match take on events.

“Have they said they lacked belief, yeah?” Solskjaer asked the reporter.

“It’s a big thing. We’re human beings and that’s our job, now – it’s my job to work on going into the next game with the right mentality, a winner’s mentality, a more positive mentality.

“Of course, when you play, you might lose belief during the game when you can’t get to the ball… we couldn’t make them.. these transitions that we’re so good at, today we just couldn’t get enough of them.”

It’s been a tough few weeks for United and things need to improve after the international break if we are to get our season back on track.

West Ham got a big win against Liverpool tonight to throw a spanner in the works and Chelsea drew with Burnley on Saturday.

All the weekend needed was a different result in the Manchester derby.