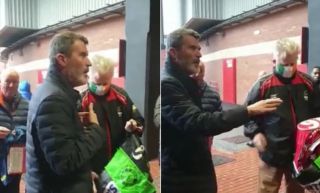 Manchester United legend Roy Keane was spotted getting into a disagreement with a fan outside Old Trafford after Saturday’s disappointing defeat in the Manchester derby.

Keane felt the fan in question was trying to take his anger from the defeat out on the wrong man, as he signed autographs outside the ground.

The Irishman had been covering the game for Sky Sports and already showed signs of frustration at full-time.

But that doesn’t make it okay for some moron to come over and hurl abuse in his direction.

Imagine all the requests former players get on match day to sign memorabilia, and most of them are brilliant with the fans and take the time out. Keane is included in that but one clown clearly took a step too far yesterday.

And, of all people to pester after a match, also, he picked Keane.

Keane questioned whether the fan had one too many drinks (2 pints) before storming off.

Classic Keane at the same time.