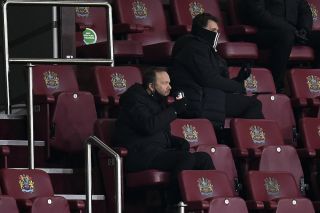 It sounds like Gary Neville was right when he said Ole Gunnar Solskjaer will be given “a few weeks” to get Manchester United’s season back on track.

The former club captain, who has always been supportive of Solskjaer as manager, admitted it could get “really messy,” though.

This all came after United were well beaten by a dominant Man City side on Saturday. The Reds weren’t at the races as they faced another big rival, with the opposing team winning the match like it was a training session.

While many supporters are calling for Solskjaer’s head, Neville thinks the board will give him time to turn things around.

“Everyone thought in the summer that they got the recruitment right, with the signings of Varane, Sancho and the late signing of Ronaldo,” Neville said on Sky Sports.

“The club have not planned for this. I know there are some United fans who think that maybe the club should have acted two weeks ago because Conte was available.

“They are not prepared for this moment because they’ve got the plan behind Ole, they’ve got the staff behind him. I don’t think there’s any chance they’ll make a decision this season unless it gets so bad.

“They’re three tough games and it could get really messy.”

However, in an article discussing the possible candidates to take over from Solskjaer, The Athletic’s ever reliable Daniel Taylor states that there is no indication United are about to sack their current manager.

“United are hoping this crisis blows over and there is no sign that [executive vice chairman] Ed Woodward — now understood to be in his final weeks as chief executive — wants to remove Solskjaer as his final act before cutting his own ties,” Taylor wrote.

“Solskjaer, in other words, appears to be staying where he is. What would be unacceptable at just about every other elite club is, it seems, acceptable for the current United regime.”

There has been whispers from several media outlets that United are keeping their options open, but right now it looks like Solskjaer will be in charge after the international break when he will set out everything he needs to get our season back on track.

Can he do it or will it get messy like Neville says?

Ed Woodward knows he will be leaving the club but he was given the role of appointing all managers since Sir Alex Ferguson. Can he be trusted again?

You know our answer to that.

One response to “No movement from Manchester United on managerial situation”