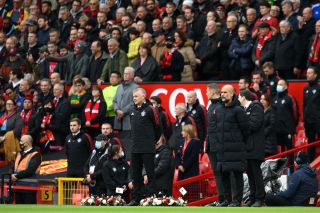 According to The Guardian, Ole Gunnar Solskjaer expects to be in charge of Manchester United for the next match against Watford, which comes immediately after the international break.

At that stage, United will be looking to turn a corner without needing to make any excuses for themselves. The manager knows his job isn’t as safe as he needs it to be after a shoddy start to the season and Saturday’s 2-0 defeat against arch-rivals Man City was another bitter pill swallow… and we’ve swallowed plenty already this season.

Jamie Jackson, author of Ole Gunnar Solskjaer’s biography, writes this piece carefully for The Guardian as he states ‘as of Sunday’ the club haven’t changed its position on the manager. He adds there was no indication from Joel Glazer after the derby that Solskjaer would be fired.

Solskjaer was taken aback by Harry Maguire’s post-match comments, but he will plan for Watford like he does every other match, unless something dramatic happens over the international break.

I can’t imagine Solskjaer is getting much sleep at the moment, but results can only help.

The question now is whether they’ve been too bad for too long – as United could soon kill any chances of having involvement in this year’s title race. It helps that Chelsea and Liverpool both dropped points in the Premier League this weekend, but then you remember that we didn’t take advantage of that and City did at our expense.

City played with United like a wounded animal to make it worse.