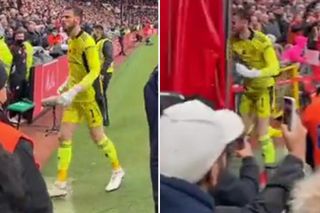 David de Gea says he is “hurt” after losing the Manchester derby.

We’re sure he and others are hurt after the recent run of results, with the 5-0 suffering against Liverpool standing out like a sore thumb.

Speaking of potential sore thumbs, De Gea let his feelings known at full-time as he walked down the tunnel.

The Spaniard threw a punch out of anger in response to the 2-0 defeat which only sets United back further.

De Gea, who was one of the players at fault for Man City’s second goal, still managed to keep United at bay with some outstanding saves in the first half when the defenders were run ragged by Pep Guardiola’s men.

One thing is certain… it’s going to be a long international break.