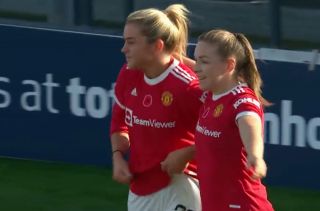 Manchester United Women were held to a 1-1 draw by Tottenham Hotspur at the Hive Stadium.

Unfortunately for Alessia Russo, her brilliant near-post strike was cancelled out by a late free kick from distance scored by Tottenham Hotspur’s Ria Percival in the 95th minute.

The two goals came at the end of either half, with Manchester United Women leading for most of the second half only to throw away their lead at the very end.

Russo does brilliant for her goal, though.

She beats three players before driving the ball home past the goalkeeper.

Check out Russo’s rocket strike above, courtesy of the WSL.

This result means United trail Spurs by two points in the WSL table.