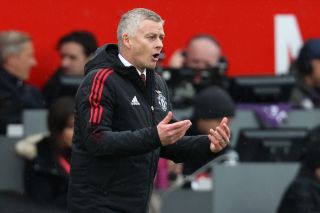 Manchester United rolled over once again this weekend as they let an out-of-form Manchester City side comfortably leave Old Trafford with all three points before the international break.

Ahead of the game, Gary Neville was speaking about the magnitude of the fixture and argued that the performance was more important than the result.

He was right – it was all about the how this evening and Manchester United, and Ole Gunnar Solskjaer, failed miserably against Pep Guardiola’s side.

The embarrassing 5-0 defeat to Liverpool two weeks ago piled pressure on Solskjaer and he was on the brink of losing his job at the time but was given a final chance by the Old Trafford hierarchy. Now, it very much feels like his dismissal is a question of when and not if.

Manchester United were absolutely appaling in the game, barely laying a glove on their noisy neighbours. An early own-goal gave City the lead and from that point, it was one-way traffic. In the second half, the visitors barely tried to score a third goal but instead opted to save their legs, whilst United were chasing shadows.

If the scrutiny on Solskjaer was not already at an all-time high, it will be now as we enter the final international break of this calendar year.

The scheduled two-week breaks are notoriously known for primetime to make a managerial switch and although able replacements are scarce, it won’t be surprising to see Manchester United pull the plug on this failed project.

Solskjaer signed a new three-year deal over the summer so should be dismissed, a healthy severance package is due his way.

2 responses to “Trouble for Solskjaer: hapless performance vs Man City puts his job in danger – opinion”