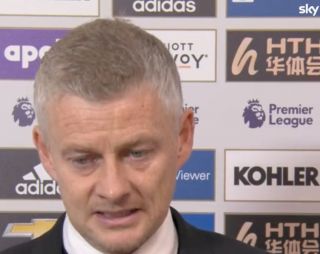 Ole Gunnar Solskjaer found his future back in the headlines after a derby defeat that was made look easy for Man City.

It was a sorry response to what the fans were made endure three weeks ago, losing 5-0 to Liverpool, and there was that same lack of fight in today’s performance. This is Solskjaer’s team and we are a million miles away from where we need to be.

United now have just one win from their last six games in the Premier League and the run will likely see us sink further behind league leaders Chelsea this weekend.

Boos were heard at half-time as the players left the field and we are sure to be reading plenty of speculation over Solskjaer’s future throughout the international break.

The writing was on the wall when Eric Bailly put the ball into his own goal after seven minutes. Then, a goal from Bernardo Silva made it 2-0 before the break and City were on their way to securing three points.

It was a dominant and controlled performance by one of our bitterest rivals.

Listen to Solskjaer’s take on the match below, courtesy of Sky Sports:

🗣 "It was always going to be a difficult game anyway…"

Of course it was going to be a difficult game!

We played the reigning champions and a side who reached the final in last season’s Champions League.

But we never in the game… Not one positive spell throughout the 90 minutes.

While we clearly aren’t playing how Solskjaer would imagine a United side to play, he needs to change something quick because the football has looked clueless this season and we are being found out by teams a lot weaker than City.

Take Aston Villa as an example. Winless in the league since their 1-0 win at Old Trafford in September.