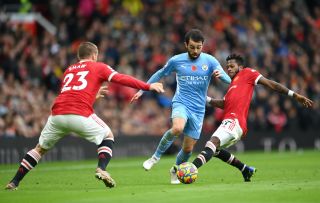 Roy Keane was in disbelief at how bad things were at half-time in the Manchester derby.

Trailing 2-0 after an own goal from Eric Bailly and another from Bernardo Silva, Man City had a two-goal cushion going in at the break. There were boos as the half-time whistle blew and Keane took aim at two Manchester United players for their performances.

The problem is how we’ve showed up for yet another big game and looked a million miles away, in terms of being a side ready to compete with the best teams in the Premier League.

So many top players, but nothing to show for it when it comes to results.

Speaking on Sky Sports at half-time, as per The Mirror, Keane called out the lack of urgency and fight in Ole Gunnar Solskjaer’s side – which was very clear to see three weeks ago, against Liverpool.

He said: “This defending, Shaw, not enough pressure. When they [City] get the ball in this area you’ve got to have intensity, you’ve got to put pressure on.

“You’re on the ropes…stay in the game. You’re like a boxer.

“Look at Shaw here and the goalkeeper. I’ve been cursing these fellas for years. I give up on these players.

“These are international footballers. I can’t understand the defending. I give up.

“They’ve been like this all season. Giving up chances.

“Unless United do something drastic, there’ll be another four or five.

“They have to get the next goal or it’s going to get really, really ugly.”

De Gea did make an impressive save to prevent Gabriel Jesus doubling City’s lead at 1-0, so the scoreline could be a lot worse this evening.

However, it’s still 2-0 but with 85 minutes on the clock it doesn’t look like United can keep the ball for long enough to create enough chances to crawl back into this game.

A sad state of affairs.