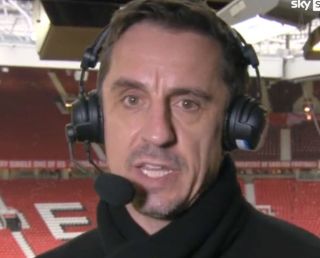 Gary Neville did a good job explaining the current state of things at Manchester United on Sky Sports after the Manchester derby.

“They looked frightened to death… crumpled up in a little ball in the corner waiting to be beat” was a fitting assessment of United’s dire performance. Ole Gunnar Solskjaer and his coaching staff have a lot of questions to answer and they’ve really piled up in recent weeks.

Neville was fearful of pre-match talk that the Reds would sit deep and play on the counter attack to a point they completely forgot the need to get the balance right with some courage on the ball.

Check out Neville’s post-match assessment below, courtesy of Sky Sports:

🗣 "They looked frightened to death… crumpled up in a little ball in the corner waiting to be beat"@GNev2 explains what went wrong for #MUFC as they lost to rivals #MCFC at Old Trafford. pic.twitter.com/FNoOwuXfBv

What’s the point having some of the best players in the world if you don’t intend on playing some football?

It also comes down to our players showing some guts and we look nervous in big games.

United just stood there to make it look like a training session, and you could tell by Phil Foden’s interview at full-time that he hardly burst a sweat. There is no fight in that United side as it looks totally shot of anything it once had going for it.