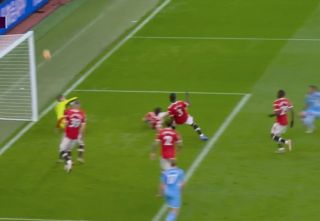 It has been great to see David de Gea back to his best for Manchester United this season.

It seemed like Spain had completely given up on the shot stopper at Euro 2020, but Ole Gunnar Solskjaer has always backed his goalkeeper to get back to his best. Shame his form has come at a time other players in the team are underperforming on a weekly basis.

Today, we are seeing another example of that.

We are getting close to half-time and City have been a million miles better than United.

Moreover, the home crowd is a lot flatter than usual – and hopefully that changes quickly in the second half.

De Gea managed to keep us in the game, too. It took a brilliant save to deny Gabriel Jesus, with the Brazilian standing in a great position to double City’s lead.

One problem United are having is dealing with City’s press.

There has been calls from the crowd to stop playing out from the back – as it’s not one of the team’s strong points, with City catching us every time we attempt it.

The only other solution — from what I’ve seen thus far — is to kick the ball long. That has resulted in, usually, losing possession immediately and puts even more pressure on our defenders.

Something needs to change here, it’s been nowhere near good enough from United.