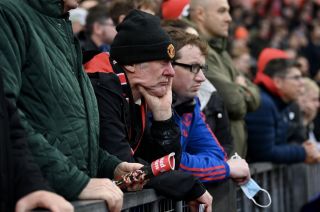 The Red Devils, who hosted arch-rivals Manchester City at Old Trafford in Saturday’s early Premier League kick-off, would have been hoping to extend their unbeaten run to three games.

Read more: Ole Gunnar Solskjaer on brink of being sacked after latest horror-show

A jam-packed Old Trafford watched on as defender Eric Bailly gifted their opponents an early lead after slicing a clearance beyond goalkeeper David De Gea and into the back of the net.

To make matters worse, the Citizens then doubled their lead just before the half-time break after some poor defending from Luke Shaw allowed Bernardo Silva to poke home an effort at De Gea’s near post.

Shockingly, although United had already conceded an early own-goal, centre-back Victor Lindelof almost replicated his team-mate but not before De Gea came to the rescue.

In fact, so poor were United that a shocking stat has emerged which proves just how lacklustre they were when it came to threatening their opponent’s goal.