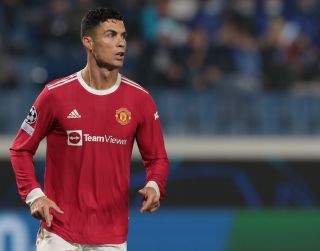 The Portuguese superstar appeared close to a move to the Etihad in the final days of the transfer window in August before completing an incredible return switch to Old Trafford, where he had left 12 years prior for Real Madrid.

If you believe The Mirror’s slant of the story, it’s that Sir Alex Ferguson intervened after hearing talk of Ronaldo joining City before calling his former player to convince him United were also interested in making a deal happen.

From that point the deal was struck quickly. There could only be one winner once United put their hat into the ring.

Thus far this season, at 36, Ronaldo has proved to be a smart piece of business from United – scoring important goals and putting fear into rival managers before they visit Old Trafford.

“The good thing is that it would never happen,” Solskjaer said when asked had he contemplated Ronaldo playing for City in Saturday’s derby (via The Independent).

“There was no chance of that happening. I’m happy he is wearing the red and hopefully he can be the difference again.

“He’s one of the best players that’s ever walked on this planet.

“His impact so far on and off the pitch has been absolutely immense, the goals he scores, the way he conducts himself in and around the place.

“How people can say that’s a negative I can’t see that one.

“That’s what he does, he scores goals, he works for his team and he’s a top, top professional.”

Ronaldo and his agent, Jorge Mendes, knew exactly what they were doing in the days leading up to Ronaldo’s transfer to Manchester United.

The leaks about City, especially in hindsight, seem intentional from one side.

City would love to be lining up with CR7 in the derby but he stuck with his heart in the end.