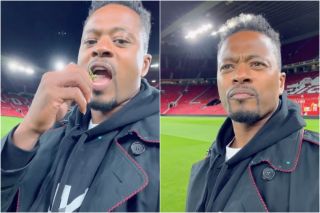 Former Manchester United defender Patrice Evra remains one of the most popular fan-favourites at the club and his weekly updates on social media are the highlight of the week for some people.

Evra is vocal in his support of the Reds and was particularly present for the sensational saga which saw Cristiano Ronaldo complete his second coming at Manchester United.

Two years ago, he returned to the club to complete his coaching badges, and now, he’s back at Old Trafford but has left the Theatre of Dreams with fewer blades of grass.

The former France international was far from impressed with the taste, however, jokingly arguing it tasted better in his playing days. Perhaps the inconsistent performances on that pitch are starting to wear off.