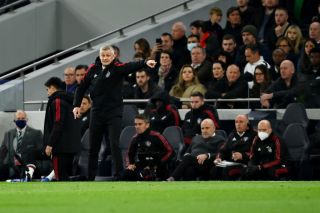 Manchester United will be looking to close the gap at the top of the Premier League table on leaders Chelsea to five points when they take on Manchester City at Old Trafford, on Saturday afternoon.

The Reds go into the game on the back of a late 2-2 draw with Atalanta in the UEFA Champions League midweek, whilst City ran out 4-1 winners over Club Brugge at the Etihad.

Paul Pogba will miss the derby as he sits out his three match domestic suspension having been sent off against Liverpool and Raphael Varane will also miss the clash after sustaining a hamstring injury midweek.

Having suffered a disastrous 5-0 home defeat to Liverpool only a few weeks ago, Solskjaer knows he cannot afford to have a repeat this time round against Manchester City if he is to turn the Reds season around.

Victory over Spurs last weekend and rescuing a point midweek against Atalanta may have eased the pressure somewhat on Solskjaer, but that defeat to Liverpool is still very much fresh in the minds of many and in facing Manchester City on Saturday afternoon it gives the Norwegian a real opportunity to put the Liverpool defeat behind him and really kick start United’s season again.

However, it wont be easy. Manchester City remain arguably the best team in the land and for United to beat them they will without doubt have to be at their very best.

Having beaten City in the past, Solskjaer knows what it takes against Pep Guardiola’s men and with City’s defence still not yet recovered from the departure of Vincent Kompany it is there to be got at and with Ronaldo, Fernandes and Rashford all likely to start its vital United attack City right from the off and really get at their defence and grab an early goal.

It’s a game United and Solskajer cannot afford to lose and which I do think the Reds will win. I expect there will be a lot of goals and it will be a close affair but I think United will beat City in the end albeit it will be very close.