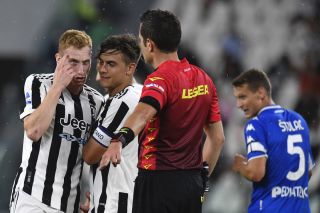 Manchester United are among the clubs interested in Juventus winger Dejan Kulusevski, according to reports. The Sweden international has struggled since the Old Lady changed coach and could now be available on the transfer market.

According to CalcioMercato, Kulusevski’s underwhelming performances this season has put doubts into the Juventus hierarchy over his ability to fully break into the first-choice eleven, with the player described as a ‘mysterious object’.

Juventus signed Kulusevski from Atalanta in 2019 for a reported €44m including add-ons but have so far failed to find a functioning formula for the exciting attacker, which has frustrated Juventus to the point where his future at the club is far from certain.

As per the report, his former club Atalanta joins United in keeping an eye out on Kulusevski. CalcioMercato detail how past links between Manchester United and Kulusevski have failed to develop into anything concrete but that interest could return in the upcoming January transfer window.

SN’s verdict on United’s reported interest in Kulusevski…
In the past, Manchester United have pined for a right-sided attacker but the emergence of Mason Greenwood and the big-money signing of Jadon Sancho seems to have plugged that gap.

Ole Gunnar Solskjaer was clear in his desire to bring Sancho to the club and although his start has been underwhelming, the 21-year-old remains the favourite to occupy United’s right wing for the next decade.

Kulusevski is an extraordinary talent, highlighted by his regular appearances for Sweden, but a move to Manchester United looks unrealistic as of now.

Solskjaer is spoiled for choices in attacking areas. It must not be forgotten that Solskjaer has another former Atalanta star on his hands. Amad Diallo joined the club in January this year but has struggled for minutes.

The young Ivorian was close to joining Feyenoord on loan over the summer but the move collapsed at the 11th hour to an injury sustained in training.

One response to “From Italy: Manchester United and Atalanta interested in Juventus star”