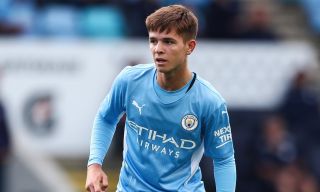 Manchester United are reportedly keeping tabs on Man City teenager James McAtee, who previously spent some time at the club.

The 19-year-old attacking midfielder has impressed this season for City’s youth side, scoring 15 goals in 14 games, and there are people now across the city beginning to ask questions.

McAtee netted a hat-trick against Club Brugge on Wednesday in the UEFA Youth League as City lost 5-3, which is likely to increase the volume of interest in his signature from clubs across Europe.

An article by The Sun labels the young midfielder the ‘Salford Silva’ for his likeness to former Man City and Spain star David Silva, but that doesn’t give him a pathway into Pep Guardiola’s plans.

Moreover, The Athletic reported that Brighton had a £8 million bid for him turned down in the summer, so it’s clear that he is already highly-rated by other Premier League clubs.

The Mail, however, claim United and Barcelona are among a list of clubs keen to sign McAtee by taking him from under City’s nose.

He was already part of United’s academy as a young boy, so it wouldn’t be difficult to find a point of contact close to the boy. The Telegraph reported in 2016: “They wonder privately at Manchester City if it will prove to be their ‘Ryan Giggs moment’”.

McAtee has 18-months left on his current deal at the Etihad and it wouldn’t be unlike United to take one of their rivals’ best talents straight from their youth system.

The other clubs interested are said to be Ajax, Atletico Madrid and Liverpool.

It’s always a good sign when United can pull the best young players out of the likes of Liverpool and Man City.

We’ve done it quite a bit recently, too, with Charlie McNeill (joined from City) and Ethan Ennis (joined from Liverpool).

As long as they’re good enough, long may it continue.