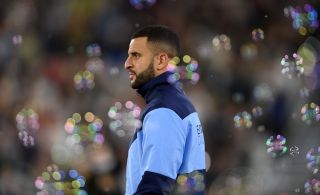 Manchester City have potentially been dealt a huge injury blow ahead of this weekend’s Manchester derby as defender Kyle Walker is a doubt ahead of the game on Saturday.

With the exception of winger Ferran Torres, United’s noisy neighbours reported a clean bill of health ahead of their Champions League game against Club Brugge earlier this week.

Their 4-1 win over the Belgian could have come at a huge cost for Guardiola’s side, as they may be without their first-choice right-back.

Guardiola is not the only manager with injury worries as Solskjaer has been left mulling over which defenders he has at his disposal for the game.

The Norwegian boss could be without Victor Lindelof for the game, with Raphael Varane ruled out with a hamstring injury sustained against Atalanta earlier this week.

SN’s verdict on Kyle Walker’s potential absence…
In previous meetings between the two sides, Walker has been vital for Manchester City in the transition. The formula for Solskjaer against Guardiola has often been to hit them on the counter-attack but Walker’s presence in the backline eliminates a large portion of that threat.

Should the England international not be available for the derby, Solskjaer could adopt similar tactics once again in a bid to extend his unbeaten run against Guardiola to five Premier League games.

Manchester City are not short of options, however. Portugal international Joao Cancelo prefers a role on the right whilst Oleksandr Zinchenko could then slot in at left-back.