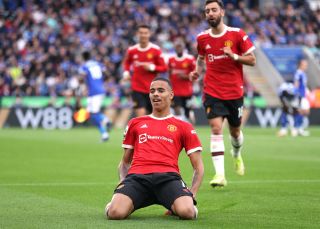 Mason Greenwood broke through the ranks in the final months of the 2018/19 season and was handed his first start for the club on the last day of that season, a home defeat to Cardiff City.

Greenwood was United’s best player on the day and his efforts earned him a place in that year’s pre-season preparations.

Since that month-long pre-season in Asia, Greenwood has enjoyed ups and endured downs for the first team. He has reached double figures for goals in both of his full campaigns but has had some of his successes blighted by unfair media coverage, most notably after his first England call-up.

Greenwood’s England career so far amounts to just a couple of minutes – he was introduced late in a 1-0 win over Iceland in September 2020. Just days later, he withdrew from the squad due to disciplinary issues.

Predictably, the large sections of the press jumped on the then 18-year-old and a challenging start to the season ensued. After scoring five goals in the last seven games of the previous season, he didn’t score his first goal of the 2020/21 campaign until December – a 3-1 win over West Ham.

This season, Greenwood has been in scintillating form. He has been rewarded with nine starts out of ten in the Premier League and is one of the first names on Ole Gunnar Solskjaer’s teamsheet – so why has he not been recalled by England?

Gareth Southgate offered some clarity on the situation ahead of the third international break of the season, confirming that Greenwood has asked to not be considered for England until next year.

This week on the Stretty News newsletter: Mason Greenwood: United > England: the way it should be!

That tumultuous period around his first involvement with England’s senior side would have been enough for many players to be shunned by England. Earlier this year, Leicester’s James Maddison was excluded from England discussions after off-the-pitch troubles. Not for Greenwood, though.

Greenwood was named in Gareth Southgate’s provisional 33-man squad for this summer’s European Championship but decided to pull out of the tournament due to a troublesome groin injury. It’s safe to say that he had earned his place in the team after an impressive end to the season.

Now, he is arguably the most exciting young English forward and he holds all the cards. England came calling but Greenwood’s decision to not accept shows maturity beyond his 20 years – when the press relying on his performances did everything to create a narrative of the opposite.

Greenwood is perfectly entitled to reject any call coming from Southgate. The former Aston Villa player threw him under the bus after the incident in Iceland, with the player left completely vulnerable to online attacks and scrutiny. Solskjaer, who is a real role model for the young forward, did the polar opposite and protected his prized asset.

Despite being classed as a good man-manager, Southgate handled the Iceland incident horrifically. Publically, Greenwood was given no reassurances over his future with England but instead ridiculed.

Should Greenwood decide against an England call-up again in the future, he will be vindicated in his decision. This one is on Southgate, the FA, and England.