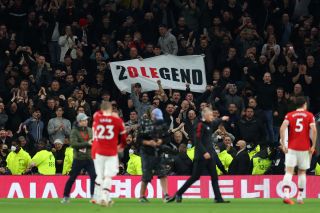 The ultimate aim for Manchester United is to be the best team in the land. Yes, we want European Cups, but winning the Premier League has always been our bread and butter.

It is Ole Gunnar Solskjaer’s job, or his successor (depending on what happens over the coming weeks and months), to take us to that promised land and this weekend’s Manchester derby is huge not only in terms of getting our domestic season back on track, but salvaging the Norwegian’s job also.

As fans, we are still very much behind the manager, but he knows he cannot afford another cricket scoreline at the hands of our rivals — like we seen against Liverpool at Old Trafford three weeks ago. It’s not good enough and nobody wants to be throwing the towel in before Christmas as we’ve done in many seasons post-Ferguson.

However, having won everything as a player during his time at United, Solskjaer obviously wants to experience that as a manager of his beloved club.

He was asked at Friday’s press conference about the potential of Saturday’s opponents Man City eclipsing United’s historic achievements in the coming years.

City will forever be in United’s shadow but there is no denying that they are currently the best team in the land.

With arguably the best coach (Pep Guardiola) in England, City are the reigning champions with reason – and that isn’t an easy thing to say as a Red who grew up seeing multiple title triumphs.

“I can’t ever see it happening [City eclipsing United’s success],” he added.

“But at the same time, you have to have respect for what they have done in the last 10 years, and even more so in the last four or five years with how dominant they have been here in England.”