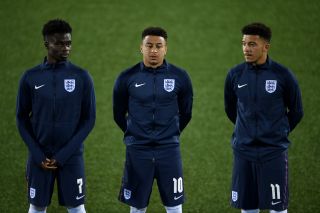 The last international break of the calendar year is just around the corner and following Saturday’s Manchester derby at Old Trafford, yet another two-week break will commence as the latest World Cup qualifiers take place.

England are somewhat comfortable in their qualifying group, sitting pretty in first place on 20 points but will need a result in their first game against Albania to secure qualification.

Jadon Sancho and Jesse Lingard both featured in the last England camp but according to reports, the Manchester United duo could face the axe ahead of next week’s camp. That’s according to the Daily Mail, who say that both players appear to be at risk of missing out on a place in Gareth Southgate’s squad.

Harry Maguire, Marcus Rashford, and Mason Greenwood were all left out of the last squad, with the first two flagged as injury absentees. The publication argues that the trio’s availability, along with a host of other players, could dent Sancho and Lingard’s hopes of completing a hat-trick of England camps this season.

SN’s verdict on the report…
Sancho’s underwhelming start to life at Manchester United was bound to have repercussions on his involvement at international level and a circuit breaker from his difficult spell could help him. Turning his fortunes around at Old Trafford is paramount and two weeks with the coaching staff at Carrington could be invaluable.

The same can’t be said for Lingard, who has been sparingly used by Ole Gunnar Solskjaer this season, despite impressing in his few cameo appearances. The 28-year-old is in desperate need of first-team football and a move is possibly on the agenda in January.

Lingard has less than one year remaining on his current contract at Manchester United and his fine form over the last 10 months will have alerted several top clubs.